Bangladesh police shot live bullets after a group of enraged protesters torched an officer’s house and attempted to set a Saltha police station on fire.

At least three people were shot after police in Bangladesh opened fire on the anti-lockdown protesters leaving one critical, reported Al Jazeera. Nationwide demonstrations were sparked after the government enforced a week-long ‘strict lockdown’ suspending domestic air travel, railway operations, reducing office capacities by 50 percent, and shutting malls, cafes, and all other nonessential services and establishments within the country to control the rising trajectory of the COVID-19 cases and mitigate the death toll. On Sunday, the country registered 7,087 new cases within 24 hours and 52 fatalities, the highest since August last year when the pandemic hit, according to Johns Hopkins University Center data.

“Other than the emergency services, all government, and private offices, and industrial units will have to be run with 50 percent workforce in view of the situation,” an emergency order issued by the Prime Minister’s Office stated.

In high-risk zones the government banned movement, issuing home confinement orders and slashing public transportation capacity by half, and keeping banks open for just 2 and a half hours. Citizens were warned not to leave homes between 6 pm to 6 am, according to the government advisory. 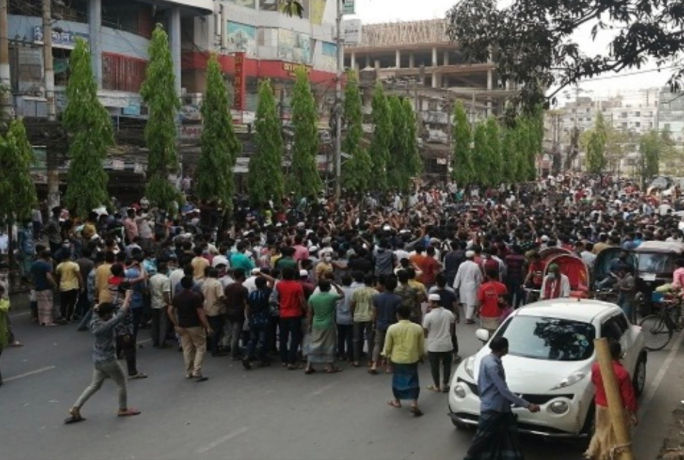 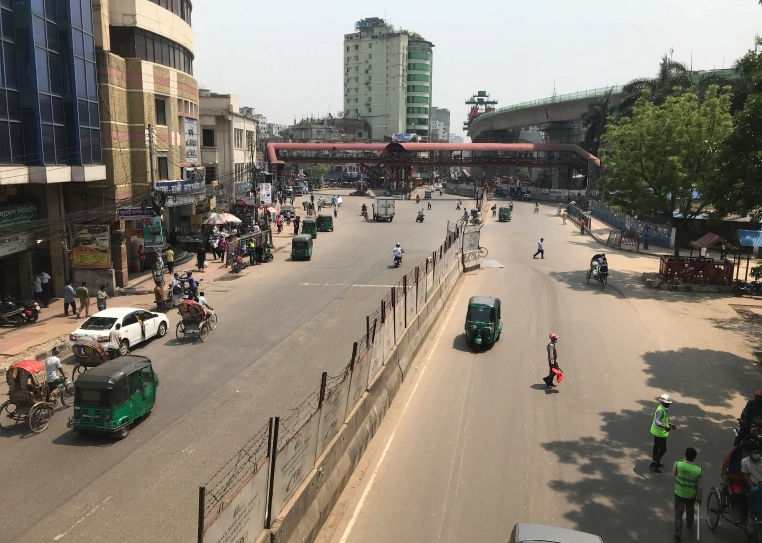 In opposition to the new measures to curb the coronavirus wave, which is near-collapsing Bangladesh’s healthcare system, protesters demanded that the ban must be lifted, shouting slogans against the government. Mob confronted the police force deployed to ensure adherence to mask rule and attempting to disperse the uprising.  According to multiple local press reports, the mob turned violent as they burnt vehicle tires, hurled bricks at the law enforcement officers, and vandalized government offices in the central town of Saltha in the Faridpur district.

Police shot live bullets after a group of enraged protesters attempted to set a police station on fire. Protesters also reportedly torched an officer’s home and at least two government employees’ vehicles. Officers told news agencies that the protests were joined by the hardliners Hefazat-e-Islam who ransacked the Saltha police station. A senior inspector told press reporters on the ground that the officers opened a round of firing as an act of defense from the attacking mob that outnumbered them. Several protesters were reported injured due to the stampede and were rushed to the state-run Faridpur Medical College Hospital.