The government dropped the charges after activist and media backlash 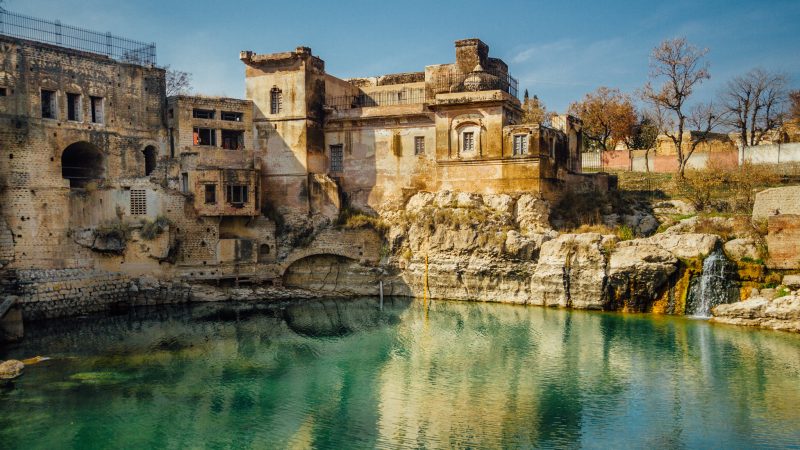 The Shri Katas Raj Temples, also known as Qila Katas, is a Hindu Temple Complex in Choa Saidan Shah, a small town of Chakwal District in the Punjab Province of Pakistan. Image via Flickr by ClicksByMohammadOmer. CC BY-SA 3.0

An eight-year-old Hindu boy has been charged with violating Pakistan’s blasphemy laws in Bhong village of the Rahim Yar Khan District in the Punjab province after urinating in a madrassa (a Muslim religious school) library. According to Pakistan’s controversial blasphemy laws, violators could face life in prison or death. Critics say these laws have long been used to persecute minority groups in Pakistan.

In late July 2021, a teacher in the madrassa lodged a police complaint that a young non-Muslim boy entered the library and urinated on a carpet. Police arrested the child and charged him with blasphemy. He spent a week in prison until a court granted him bail on August 4. After the announcement, dozens of people protested his release and vandalised a Hindu temple in Bhong.

Numerous videos went viral on social media showing a mob of people desecrating the Siddhi Vinayak Temple in Bhong and also briefly blocking a nearby motorway.

The boy’s family went into hiding, and many other Hindu families from the locality have since fled their homes. Paramilitary troops were deployed to the area to diffuse the situation and prevent further unrest. So far, 50 people have been arrested for vandalising the Hindu temple and 100 more are being investigated.

In a Twitter thread, Parkash Heerani from the Pakistani Hindu community noted that there have been seven attacks on Hindu temples in Pakistan in the past 12 months:

Protests against the blasphemy laws

On August 9, 2021, Amnesty International asked the Pakistan government to drop the charges against the boy and provide adequate protection for him, his family, and the local Hindu community.

About South Asia, a collective of feminist journalists highlighted a petition by Hindu Samata to protect vulnerable Pakistani Hindus:

Sadly, the sort of religion these fanatics are following does not care about the sanctity of other people’s places of worship. Action should be taken against all these people and severe punishment should be given. We apologize for hurting the Hindu community in such a senseless manner.

The government rejects the blasphemy case

On August 11, 2021, Hafiz Tahir Mehmood Ashrafi, the Special Representative to the Prime Minister on Religious Harmony and the Middle East, claimed that the case registered against the eight-year-old Hindu boy in Rahim Yar Khan was not covered by the country’s blasphemy laws. He strongly denied The Guardian’s report, saying in a statement that the newspaper had misreported the issue and that “the desecration of seminary case should not have been registered by police as such cases defame the country.”

The charges against the boy were baseless. Minorities are equal citizens and these are illiterate people attacking worship places. Our Islam does not allow attacking of any other religion’s places of worship.

Kapil Dev, a Pakistani human rights activist belonging to the Hindu community, posted an update noting that the charges had finally been dropped:

The government repaired the temple and handed it back to the Hindu community in a ceremony on Wednesday, August 11, 2021.

Kapil Dev lauded the government for the swift restoration and solidarity:

In Pakistan, British colonial rulers first penned the laws relating to religious attacks in 1860. Pakistan inherited these laws when it gained independence in 1947. The military government of General Muhammad Zia-ul-Haq (1977–1988) expanded the laws, adding punishments for crimes such as making derogatory remarks against Islamic dignitaries or intentionally vandalising the Quran. A separate clause was introduced in 1986 that assigned a death sentence or life imprisonment as the penalty for blasphemy against the Prophet Muhammad (P.B.U.H).

According to data from the Centre for Social Justice in Pakistan, between 1987 and 2020, over 1,850 people were charged under Pakistan’s blasphemy laws.

Blasphemy laws have often been misused by mobs to enforce extrajudicial justice on minority groups in Pakistan. Since 1990, at least 80 people accused of blasphemy have been killed by mobs in Pakistan.

Moreover, anyone who tries to help people accused of blasphemy is often subjected to threats and violence. Such attacks are also common online toward people criticising the blasphemy laws, particularly journalists, academics and civil society organisations.